Blossom Lady → Mint Chocolate Chip Meringue Cookies 1 month ago
Hi! Sure! You can either leave out or substitute w...
15 January simple recipes digest 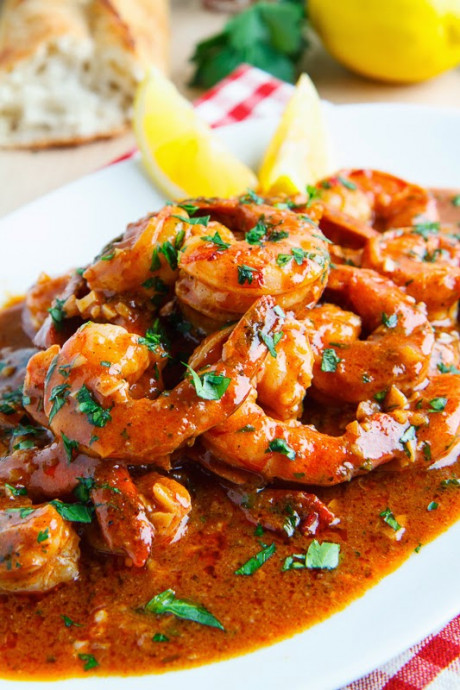 BBQ shrimp done New Orleans style in a spicy, buttery, lemony sauce that is so good that you will be licking your fingers and the plate clean!

Next week is Mardi Gras and even though I will not be in New Orleans to celebrate, I take it as an excuse to whip up some NOLA inspired dishes since I am a big fan on NOLA cuisine. Another one of my favourite dishes that I had when I visited New Orleans was the BBQ shrimp and I just had to try making it at home. Normally the BBQ shrimp is served whole with the shell and the head on but if you have any squeamish eaters feel free to serve the shrimp completely peeled. Other than the shrimp the the most important thing is the BBQ sauce which is a mixture of hot sauce, Worcestershire sauce, lemon juice, garlic and plenty of butter. The recipe itself is really easy, you just cook the garlic a bit in some butter, add the rest of the ingredients and simmer until the shrimp is cooked. Despite being so simple this New Orleans stye BBQ shrimp is so addictively good that you’ll want to serve it with some crusty bread to mop up absolutely all of the BBQ sauce. If you are looking for a way to celebrate Mardi Gras from home next week this BBQ shrimp is a great way to do it.