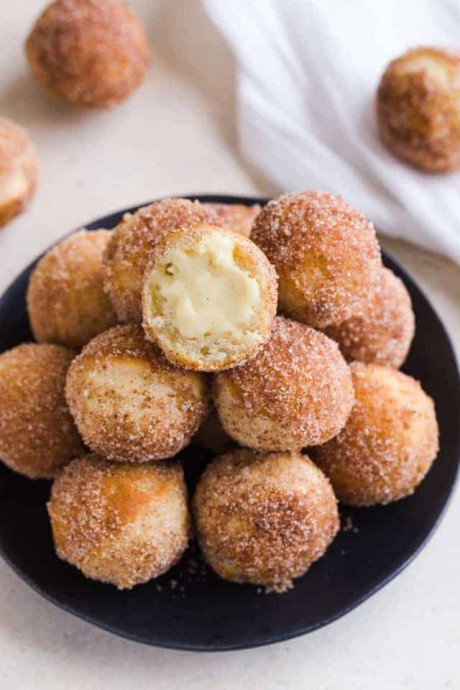 Baked Bunuelos with Anise Filling are a fun spin on the traditional bunuelos found all throughout Spain and Latin America. They consist of balls of dough that are baked instead of fried then filled with anise custard and rolled in cinnamon sugar. Have you ever had bunuelos before? They are a simple dough, most often wheat, that is fried in either a ball or flat disc shape. You can find them all across Spain and Latin America. And each country has its own way of making them.

I’m putting my own spin on bunuelos by making a baked version, filled with an anise custard, and rolled in cinnamon sugar. All the flavors work well together and the cinnamon sugar complements the filling nicely. The anise filling is definitely an interesting one that highlights this ethnic spice that's native to the eastern Mediterranean region and Southwest Asia. The flavor profile of anise seed is similar to star anise, fennel, and licorice. Some people love it while others don't really care for it. You may have some filling leftover depending on how big you make the cavity. You can save the filling and make more bunuelos or use it as a dip for the bunuelos you have.After you fill the bunuelos, brush them with melted butter and roll them in cinnamon sugar. This ties all the flavors together and makes one epic dessert.

For The Cinnamon Sugar Coating