Marina Razo → Tiropitas: Phyllo Cheese Triangles 15 hours ago
would like yo get more recipes please

Trevor West → Chicago Hot Dogs Recipe 26 days ago
Would like to make these a couple of times over th... 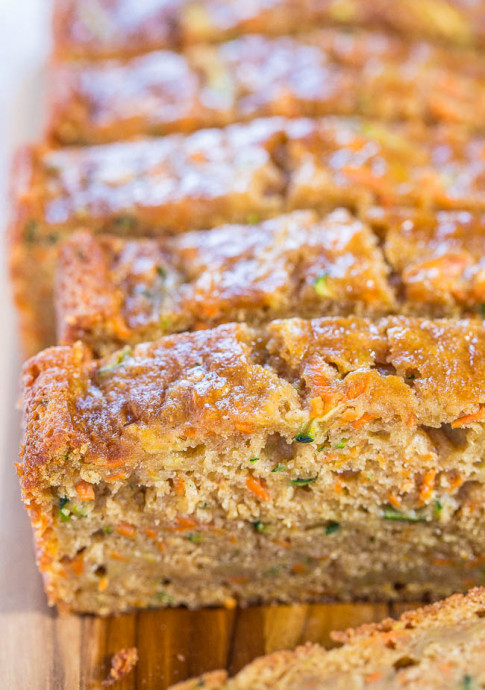 Zucchini Carrot Bread — Fast, easy, one bowl, no mixer!! Super soft, moist, and tastes so good you’ll forget it’s on the healthier side!! I loved this moist zucchini bread recipe so much. It’s so soft, tender, uber-moist, dense enough to be satisfying, but still light. It’s just sweet enough to taste like a dessert and not like you’re eating vegetables. But you are, so feel free to have seconds.

I adapted my Carrot Apple Bread recipe, and it’s an easy, no mixer recipe that goes from bowl to oven in minutes. I used liquid-state coconut oil, so there’s no butter to cream and no mixer to dirty. Oil keeps bread softer and springier than butter, and I prefer it.

Baking with carrots and zucchini not only adds chewy texture, but so much moisture is imparted that it’s impossible to have a dry loaf. I grated the carrots and zucchini by hand using the coarsest blade on a box grater. It only takes a few minutes, and I’d spend much more time washing food processor parts than doing it the old-fashioned way.

The zucchini-carrot cake bread was so flavorful and moist that I didn’t even need butter. Although a browned butter or cream cheese glaze can never hurt.