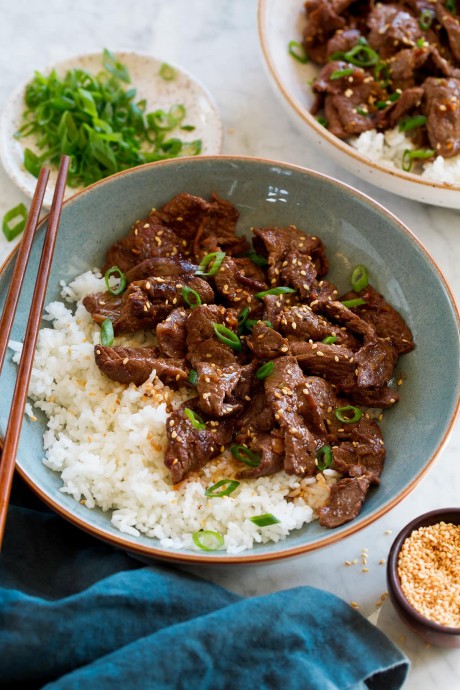 Korean Beef Bulgogi – it’s made with tender pieces of steak that have been soaked in a flavorful bulgogi marinade sauce, and it’s quickly pan seared in a cast iron skillet in batches until perfectly browned.

Bulgogi, which translates to “fire meat,” is a popular Korean barbecue dish made with beef such as top sirlioin, ribeye, or tenderloin. The beef is thinly sliced into bite size pieces then it’s marinated in a simple, savory and sweet bulgogi sauce. After that it is either cooked on a charcoal or gas grill, pan seared on a griddle or stir fried in a skillet until the exterior is just browned and caramelized.

Bulgogi is pronounced in English buul-GOH-ghee when pronounced in Korean however there’s more of a “p” sound in place of the “b.”

It’s an incredibly easy dish to make that really wows in flavor and it’s something people of all ages can agree on, making it perfect for a fast weeknight family meal or for entertaining friends on the weekend!