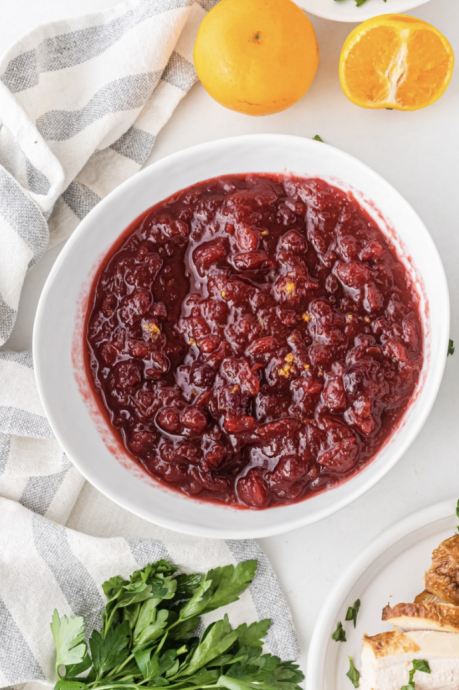 You’ve probably had it before, and more than likely it’s typical Thanksgiving fare in your house. You know… the cranberry sauce that you pry open with a can opener and then attempt to nudge it out carefully so it slithers into the serving bowl in one large, cylindrical, gelatinous blob. I grew up with the stuff, and admittedly I loved it. Mom bought the jellied kind- the kind you can slice up and slide in easily next to the turkey and mashed potatoes. Our family went through at least a couple of cans of it during dinner. The next day, another can was always popped open to slice up and include on leftover turkey sandwiches.

When I left home for college, I continued to buy and eat the canned cranberry sauce creation. And when I got married and had a family to cook for, of course I included the canned stuff in my own Thanksgiving menu. It wasn’t until years later, when I became more interested in cooking, that I would attempt a homemade version. If you try homemade- and it’s one with flavors that really appeal to you- you’re going to have a tough time going back to the canned version. In fact, the canned version may very well begin to taste more like the can than cranberry sauce. This Maple Tangerine Cranberry Sauce is one that I tried out on my family for Thanksgiving one year, and it was a big hit. Everyone loved it!