Trevor West → Chicago Hot Dogs Recipe 3 months ago
Would like to make these a couple of times over th... 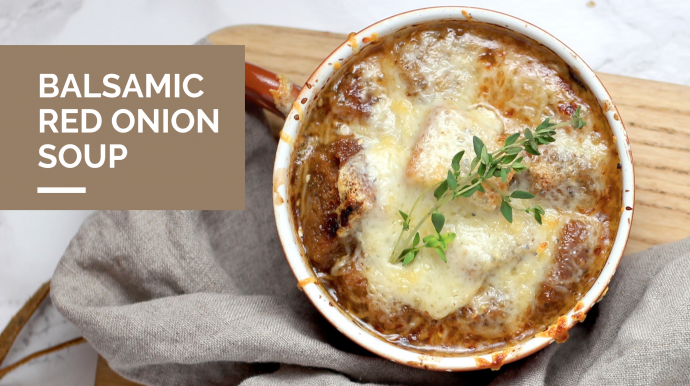 Try this sweeter, simpler take on traditional French onion soup, topped with toasted cheese croutons. You can use any kind of mustard—Dijon, spicy brown, or even plain old yellow. Make the croutons while the soup is simmering, so everything can be ready at about the same time.

1. Place a soup pot or a Dutch oven over medium heat. After about a minute, add the olive oil and swirl to coat the pan. Toss in the butter, if desired, and swirl until it melts into the oil.

2. Stir in the onions and salt, and reduce the heat to medium-low. Cook, stirring occasionally (and more often as the onions darken), for about 30 minutes, or until the onions become deep golden brown and very soft.

4. Pour in the water and bring to a boil. Then turn the heat all the way down to the lowest possible setting, partially cover, and simmer gently for 15 minutes.

5. Season with black pepper, then ladle the soup into bowls. Top each steaming bowlful with a crouton, and serve right away.

Use scissors to snip some fresh chives on top of each serving.

Use the croutons to top other kinds of soup, too. They’re particularly good with vegetable soups.

Put some extra grated Swiss cheese at the bottom of each soup bowl, then ladle in the soup and top with a crouton.

You can make these with any kind of Swiss cheese, but the flavor will be much better if you use one of the higher-end ones, like Gruyère or Emmentaler. (And if you don’t have any of these cheeses handy, you can use Parmesan, or any grating cheese with assertive flavor). This works well with day-old bread, so it’s a great way to use up what’s left of a baguette.

1. Preheat the oven or a toaster oven to 350°F. Line a baking tray with foil.

2. Arrange the bread slices on the prepared tray. Place the tray in the center of the oven and bake for about 5 minutes, or until the bread is lightly toasted. (Keep an eye on it, so it doesn’t burn.)

Make this vegan by omitting the butter and leaving the cheese off the croutons.