Randi Ziring → Air Fryer Apple Pie Bombs 26 days ago
Do you have meatless recipes substituted with a ta...

Blossom Lady → Mint Chocolate Chip Meringue Cookies 1 month ago
Hi! Sure! You can either leave out or substitute w...
28 December simple recipes digest 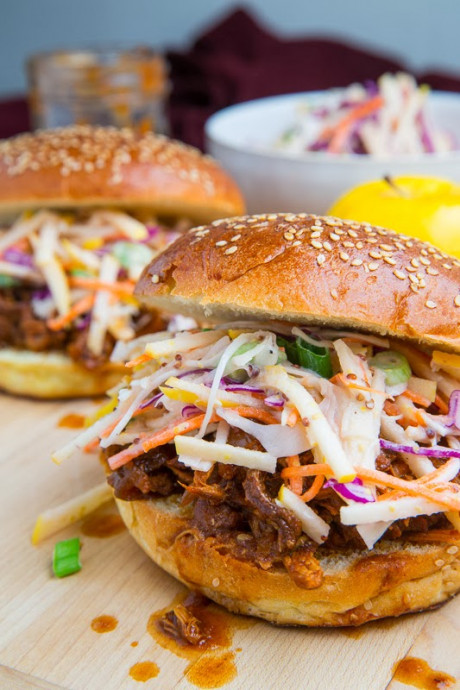 After making the roasted apple bbq sauce I couldn’t help but use it on something other than simple grilled pork tenderloin medallions and these tasty bbq pulled chicken sandwiches were up next! The idea for these bbq pulled chicken sandwiches came from one of my favourite slow cooker recipes the slow cooker bacon wrapped apple bbq chicken, I mean you really can’t go wrong with tender chicken in a sweet and tangy bbq sauce along with apples and bacon and placing it all in a sandwich with a tasty apple slaw only makes it better! Although I used my roasted apple bbq sauce, any bbq sauce will work since additional apples go into the slow cooker along with the chicken and they melt into the sauce infusing it with apple-y goodness. The bbq pulled chicken filling is as easy to make as throwing everything into the slow cooker so the only real effort required for these sandwiches comes in making the apple slaw, but it is so worth it!

Whenever you have a bbq pulled meat sandwich it is always nice to throw something into the mix to help cut through all of the flavours and a crisp, fresh apple slaw is the perfect way to do it for these pulled apple/bacon bbq pulled chicken sandwiches! I kept the apple slaw really simple with apples and cabbage and instead of placing it in the more typical mayo based dressing I used a lighter maple dijon dressing which I made creamy with the addition of some Greek yogurt. This slaw is sure to please, and disappear quickly, no matter how you use it but the apple and maple dijon combo perfectly complements these apple bacon pulled chicken sandwiches!