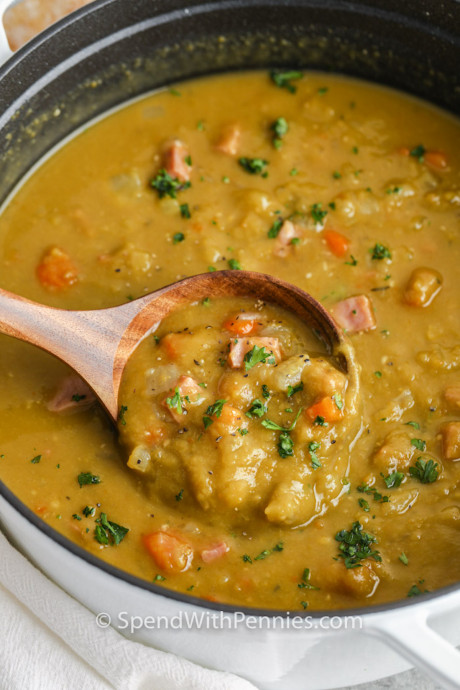 The humble pea soup has been around since 500 BC and has been a budget staple for generations. There are many versions of this soup including a Canadian Split Pea soup (most often made with yellow peas). It has a creamy consistency and delicious flavor but it is made without cream so it has fewer calories than most creamy soups.

Uses simple ingredients you likely have on hand. This split pea soup recipe is very budget-friendly. It is a healthy source of fiber and protein (and it will really fill you up). SPLIT PEAS Dried split peas are cheap and easy to find. While they resemble a lentil, they’re actually a type of dried pea. That being said, you can use dried lentils in this recipe (cooking time may need to be adjusted)! I choose green split peas because they’re a bit sweeter but you can use yellow split peas if you’d like. The cooking time will remain the same. VEGETABLES Celery, carrots, and a handful of seasonings will flavor the soup. Add a few cloves of garlic if desired. To stretch the soup even further, peel and dice two russet potatoes and add them along with the other vegetables. MEAT Use up that leftover ham. No extra ham on hand? Use cooked and crumbled pieces of bacon for that smoky, salty punch of flavor. BROTH In this recipe a ham bone flavors the broth just like in a ham bone soup. If you don’t have a ham bone you can use ham hocks (I cook ham hock for an hour before adding other ingredients). If you have only diced or leftover ham (and no bone) swap out some of the water for extra broth as the bone is used for flavor.