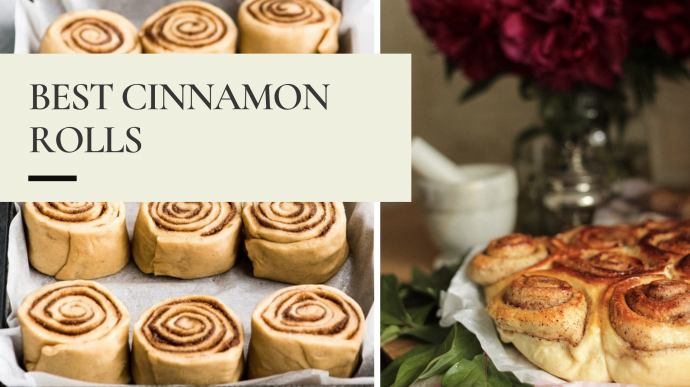 Holy pumpkin cinnamon rolly! This is my mom’s famous recipe, and it is nothing short of genius. The dough is so tender, moist, and fluffy that it puts every other cinnamon roll to shame.

I can honestly say they are even better than Cinnabon cinnamon rolls, because nothing beats fresh rolls straight from the oven! They are also easy to prepare a day in advance and let them rise overnight in the refrigerator, or they can be prepared a few weeks in advance and frozen!

Everyone we serve these to says they are the best cinnamon rolls they have ever eaten. Now, you can be the judge!

41⁄2 to 5 cups all-purpose flour, plus extra, for rolling

For the glaze (optional)

In a small saucepan, whisk pumpkin puree, nondairy milk, 1⁄2 cup sugar, salt, and margarine over low heat until combined. Remove from heat and add vanilla. Let it cool until very warm to the touch, about 110 degrees.

While the pumpkin mixture is cooling, place the warm water, remaining 1 tablespoon sugar, and yeast in a 1-cup glass measuring cup. Stir for a second or two and set aside for about 10 minutes. The yeast will become foamy, double in size, and reach the 3⁄4-cup line. If it does not do so, then the yeast is dead or the water was not at the proper temperature, so make another yeast mixture before proceeding to the next step.

In a stand mixer with the paddle or whisk attachment, combine the pumpkin mixture and the yeast mixture, and beat at medium speed for about 1 minute. Reduce the speed to low, and add 21⁄2 cups flour. Mix for about 2 minutes and add 2 more cups flour. Beat for 1 more minute.

Remove the dough from the mixing bowl. It will be somewhat wet and sticky. Place it on a floured surface and knead for about a minute or two with your hands. If needed, add a little bit of flour to keep the dough from sticking to your hands.

Transfer the dough to a large well-oiled bowl and rotate the ball of dough, so that it is completely covered with oil. This will prevent the dough from sticking to the bowl as it rises. Cover with a dry kitchen towel and place in a warm part of the kitchen. Let it sit until it has doubled in volume (about 11⁄2 hours).

To make the filling and assemble the rolls: Preheat oven to 375 degrees. Lightly grease a 9- x 13-inch pan. Roll the dough out on a lightly floured surface into approximately a 20- x 13-inch rectangle. Combine brown sugar, sugar, and cinnamon in a small bowl. Brush or spread the melted margarine over the entire surface of the dough. Sprinkle the sugar mixture and raisins evenly over the surface.

With the long end toward you, roll the dough up evenly. With the seam side down, use a sharp knife to cut the log in half. Then cut each half into six equal pieces. You will have approximately 12 cinnamon rolls. Place the rolls, cut side up, into the prepared pan, leaving some space between them. Cover with a dry kitchen towel and place in a warm part of the kitchen for the second rise until the cinnamon rolls have risen and expanded, about 1 hour.

Bake, uncovered, for 20 minutes. You will know the rolls are done when they are golden brown on top, they sound hollow when gently hit with a wooden spoon, and the outside of the rolls feel firm (and not doughy) to the touch. Let the rolls cool for about 10 minutes before glazing.

In a medium bowl, whisk together powdered sugar, maple syrup, and 1 tablespoon water at a time, until smooth. Drizzle the glaze over the rolls to coat them. Serve warm or at room temperature.

After the assembled unbaked cinnamon rolls have risen, cover them in plastic wrap in the pan and refrigerate overnight. Remove plastic wrap and bake the next day, according to recipe directions.